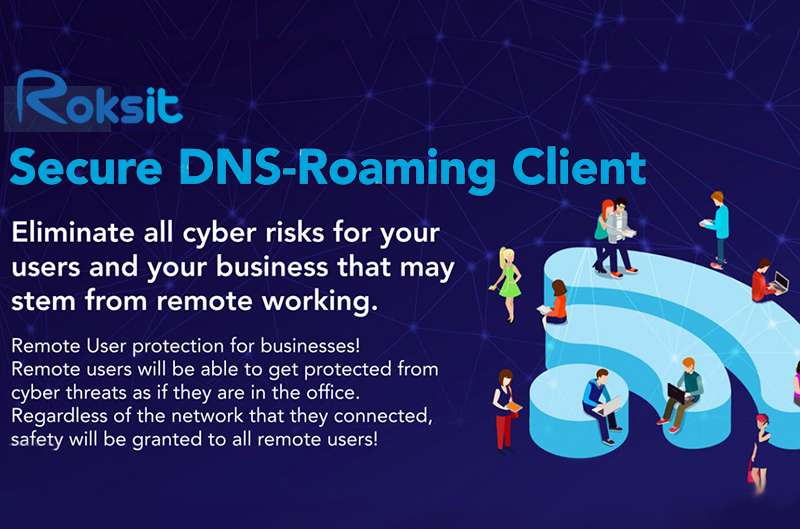 What is Roaming Client?

Because of the pandemic, a new type of remote working model emerged and became really popular since it became oneof the most proper ways to fulfill the employees’ needs.

By the courtesy of the Roaming Client module of Secure DNS which provides cloud-based traffic analysis andsecurity, the client’s DNS traffic will be analyzed, and DNS-layer protection will be also granted to the client regardless of the network that the device is connected to.

With the conditions brought by the pandemic, many employees moved to a remote working model, especially in the IT department.

In this situation, people who workremotely cannot benefit from the security services that are deployed in theiroffices. Moreover, these people will probably store crucial information andfiles on their laptops/devices regarding their company.

Hence, they will be vulnerable tonetwork hacking activities. If the client is connected to the internet in apublic place (a hotel’s Wi-Fi, a cafe, airport, etc.), she will share hisconnection with others. Therefore their passwords, significant files related tothe company, and information can be captured via a MITM (Man in the Middle)attack.

In addition to network attack risk,the people who work remotely are vulnerable to phishing, e-mail spoofing, DNSspoofing, or any type of malicious activity on a large scale.

Thus, if the device gets infected byany type of malicious activity, the user and the company would not be aware ofit since the company does not have a chance to monitor the user’s traffic.

If the device became a part of thebotnet and carries out DGA domain requests, neither the company nor the userwould not be able to see and detect these requests.

A Perfect Fit for Cyber Security for the Remote Workers, Roaming Client

How does the Roaming Client work?

The roaming Client Module is part of the Secure DNS solution.

After the registration, the local DNS servers should be directed to Roksit DNS servers and the registered network’s public IP addresses should be entered in the deployment section of Roksit’s Portal which can be reached on portal.roksit.com. This process will take at most 10 minutes.

After this process, the DNS traffic will be analyzed and protected from malicious software by the Secure DNS

The Roaming Client module can be downloaded and deployed on the devices that are the part of the network where Secure DNS is deployed on.

Hence, the employees are able tobenefit from the traffic analysis and protection regardless of the network that they are connected to.

They may roam through the internetsafely with out the need of connecting to the network or do not need to physically be there where Secure DNS is deployed.